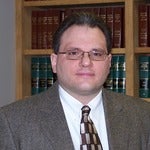 When I was a teenager, one of my friends' fathers told me I should be an attorney. I was doing a typical teenager thing at the time - spending the night at a friend's - and his parents had taken us out to dinner. We were eating pizza at Cardona's in Brighton (a restaurant that has long since closed). Why my friend's father said that to me, I do not know. Perhaps he knew something I didn't. And here I thought teenagers knew everything!

In any case, law school came after college, which came after the Army. I enlisted at age 20 and spent almost four years in uniform, including four months as part of Desert Storm. I decided to pursue a law degree in my junior year of college. I remember thinking, well, I like to argue and I like to win. How do I make a living doing that? One word: lawyer!

I have since learned that way thinking of is somewhat (but not totally) naïve. As it turns out, arguing is only part of what I do. While there certainly is a time and place for that many times good results can be obtained simply by being persistent and knowing what you're doing. By that, I mean learning the ins and outs of an area of law and how to maneuver the legal system in general.

Like all attorneys, I have cases that try my patience. I've also had cases that force me to expand my comfort zone. But in the end, it's all been good. Helping people is a good way to make a living and I am very fortunate to be able to do so.